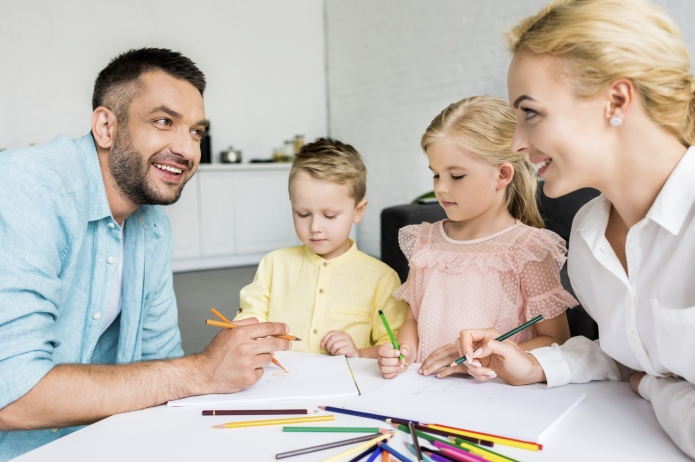 A few years ago, I was appearing before a local family law judge. After this judge called his calendar, he then shared with the attorneys, their clients and everyone else in the court room some recent updates in the law. He also shared that he spent the weekend on his hands and knees in his chambers with post it notes, pens and a large calendar putting together a parenting plan for three parents and their children. This family included two mothers and a father. His perspective was that three parent families would become more common as time passed and we, as attorneys, should be prepared for these complex custody and support cases. Recently, out of the Third Appellate District, we got a case illustrating his point: C.A. v. C.P.
(2018) _Cal.App.4th_, which lacks a full citation as of the date of this blog post.

In C.A. v. C.P., wife had an affair with her co-worker and conceived a child. She initially hid the fact from her husband, but then revealed that co-worker was the father. Wife and husband remained married and facilitated co-worker's relationship with his child for the first three years of her life. The child bonded with the co-worker and his close relatives. When co-worker filed a petition confirming his relationship with the child, to change her name and obtain paternity testing, the mother cut off the relationship between the child and co-worker.

Mother and husband timely appealed. They argued that because by statute husband is conclusively presumed to be the child's father, the child cannot have more than one father. The Third Appellate District held "The fact that defendant husband's claim to parentage arises from a conclusive statutory presumption .... [California Family Code section 7540) and [co-worker's) claim arises from a rebuttable statutory presumption .... [California Family Code section 7611 (d)) does not change the fact that each man has a claim that arises 'under' division 12 of the Family Code." (C.A. v. C.P., supra, at_).

Mother and husband argued that the legislative history in the statutes at issue were not meant to be applied where a stable marriage exists. The Third Appellate District, however, pointed out that the bill allows for three parents in a ·very narrow situation when necessary to prevent detriment to the child." (C.A. v. C.P., supra, at _citing (Assem. Com. On Jud., Rep. on Sen. Bill No. 274 (2013-2014 Reg. Sess.).) Further, "the bill requires a showing of detriment to the child and that the court must act in 'the child's best interest, including the need for stability' before making a three-parent order." (Id. at p._).

The trial court discussed all appropriate factors before making the ·rare· decision that this child has three parents. Specifically, the trial court "distinguished this case from others where a married couple consistently excluded biological father, because here .... [mother and husband) allowed ..... [co-worker) (and his close relatives) to establish a bond with the child.

The court found the child 'must be protected from the detriment of being separated from one of her three parents. The court finds it would be detrimental to [her) to recognize only two parents, thus separating her from either [husband or plaintiff). Moreover, it would be detrimental to [the child) and her progress to not allow [both men) to participate in legal custody decision making such as health and education. The evidence established [she) is a child who would benefit greatly from the continued love, devotion and day to day involvement of three parents." (C.A. v. C.P., supra, at_).

Specifically, the trial court gave "significant weight to the strong, long and enduring bond shared by [the child and ... [co­worker)) from the time leading up to her birth and from her birth and following for more than three years. [ .... [Co-worker)) was deeply involved in [her) life until he was unilaterally excluded from visits ... after he filed his petition for custody. It is also established [that husband) has a strong bond with [her) and has been part of her life since she was born." {C.A. v. C.P., supra, at_).

The Appellate Court held that the trial court ·carefully and conscientiously conducted the weighing process contemplated by the Legislature before finding this was one of the 'rare' cases permitted by statute, where a child truly has three parents, and both financially and otherwise," and "the fact defendant husband is conclusively presumed to be the child's father does not exclude the possibility that she may have a second father." (Id. at p._).

Ultimately, the Appellate Court affirmed the trial court, stating "Regardless of how it happened, the fact remains that the child's biological father is an important part of her life. For .... [mother and husband] to allow .... [co-worker] to bond with the child and then cut him off when he tried to formalize the arrangement threatened detriment to the child." (C.A. v. C.P., supra, at_).

C.A. v. C.P. is a very interesting and well-reasoned case. The bottom line for anyone facing this situation is to meet with a family law attorney as soon as possible to discuss any immediate action you need to take, or not take, to protect your rights as a parent.