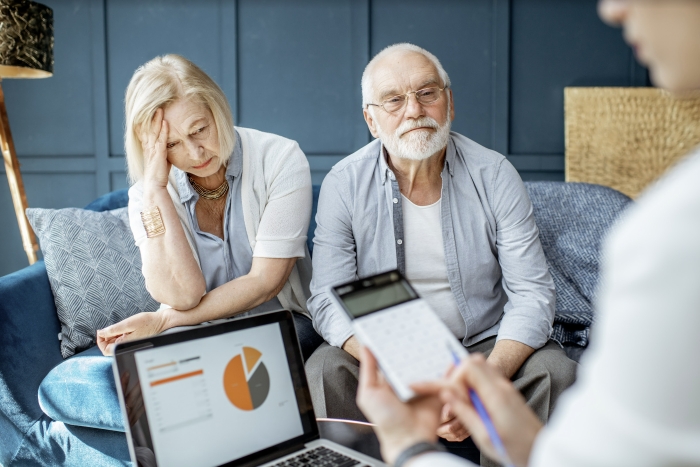 The terms “grey divorce,” “silver splitter” or “diamond divorcees” are terms used to refer to a demographic trend of an increasing divorce rate for older couples in long-lasting marriages. These particular types of divorce cases have their own particular types of issues. Marriage of McLain (2017) 7 Cal.App.5th 262 highlights just such issues.

Husband and wife were married on October 13, 2001 and separated on March 14, 2013. They did not share any children. In May 2014, husband was 68 years old and wife was 66 years old. Husband had worked as a firefighter during the marriage and wife as a personal assistant and transaction coordinator for a real estate agent and broker. Husband and wife retired in 2005. (Marriage of McLain, supra, 7 Cal.App.5th at p.266.) Wife’s primary focus since 2005 was on household duties while husband was busy building a house for he and wife in Big Bear. Wife had monthly social security income of $746 less $198 for MediCare payments and Husband’s retirement income was approximately $10,000 a month. (Id. at p. 267.)

Wife owned a house in Fawnskin before marriage and husband and wife refinanced the loan during marriage three times for construction on the Big Bear house. Key is that during the construction period, husband and wife always had joint accounts. (Marriage of McLain, supra, 7 Cal.App.5th at p.267.) Husband owned a house in San Dimas before marriage and it was sold during the marriage. Wife’s name was added to title at the time of the sale for title insurance purposes. Money from the sale of this property went into a joint account and a portion of it was used to construct the Big Bear house. The cost of the Big Bear house was approximately $507,700. (Ibid.)

The trial court awarded wife $4000 per month in spousal support and $5,500 in attorney’s fees and costs. Husband appealed and argued that the trial court erred by concluding wife has the same right to retire as husband. Husband argued that wife, as the supported spouse, has an obligation to become self-supporting and therefore does not have a right to retire. Chauvinism aside, the appellate court disagreed with him. The court cited In re Marriage of Reynolds (1998) 63 Cal.App.4th 1373, which discussed whether the supporting spouse has a right to retire when the retirement could lead to a lower income and the court held “no one may be compelled to work after the usual retirement age of 65 in order to pay the same level of spousal support as when he was employed.” (Marriage of McLain, supra, 7 Cal.App.5th at p.266 citing (In re Marriage of Reynolds (1998) 63 Cal.App.4th).)

Two of the factors the family court should consider when ordering spousal support pursuant to California Family Code section 4320 (h) are “the age and health of the parties.” The statute also provides that the family court should consider the goal that the supported party shall be self-supporting within a reasonable period of time. While there is a conflict between the portion of the California Family Code requiring consideration of (1) age, which could be interpreted as retirement age, and (2) the goal that the supported party should be self-supporting, it is clear that 65 “is the customary retirement age.” (Marriage of McLain, supra, 7 Cal.App.5th at p.269.) Therefore, given the plain language of the statute, “a relevant consideration for a court when ordering spousal support is the age of the parties, and the point of that factor is to determine if the parties are younger or older, and if the parties are older, whether they have reached the customary retirement age of 65.” (Ibid.) The court of appeal then held that the trial court properly concluded that wife needed spousal support to put her near the marital standard of living and that it would “not impute income to Wife because (1) there was no evidence she had an income; (2) there was no evidence of jobs available for Wife; (3) Wife was retired; and (4) Wife had a right to remain retired.” (Id. at p.270.) The trial court explained that wife’s retirement has been part of the marital standard of living since well before the dissolution of marriage was filed and wife “is not now going to be thrown out of retirement.” (Ibid.) For the same reasons, the court “will also not be issuing a Gavron warning to wife.” (Id. at p.271.) The trial court’s ruling on these matters was affirmed.

With regard to the Big Bear house, the trial court concluded that husband failed to sufficiently trace his separate property alleged to have been used to pay for its construction. While there was testimony about the money used to construct the house, no documents were submitted in support of the tracing of funds. On appeal, husband argued that the “trial court erred because the statute does not require tracing be accomplished with documents.” (Marriage of McLain, supra, 7 Cal.App.5th at p.273.)

California Family Code section 2640(b) states that “unless a party has made a written waiver of the right to reimbursement or has signed a writing that has the effect of a waiver, the party shall be reimbursed for the party’s contributions to the acquisition of property of the community property estate to the extent the party traces the contributions to a separate property source.” The court of appeal conceded that the term “tracing” is not defined by the statute. (Marriage of McLain, supra, 7 Cal.App.5th at p.273.) It then went on to cite the California Supreme Court case See vs. See (1966) 64 Cal.2d 778, 783 which states

Property acquired by purchase during a marriage is presumed to be community property, and the burden is on the spouse asserting its separate character to overcome the presumption. The presumption applies when a husband purchases property during the marriage with funds from an undisclosed or disputed source, such as an account or fund in which he has commingled his separate funds with community funds. He may trace the source of the property to his separate funds and overcome the presumption with evidence that community expenses exceeded community income at the time of acquisition. If he proves that at that time all community income was exhausted by family expenses, he establishes that the property was purchased with separate funds.

The California Supreme Court went on to explain “The husband may protect his separate property by not commingling community and separate assets and income. Once he commingles, he assumed the burden of keeping records adequate to establish the balance of community income and expenditures at the time an asset is acquired with commingled property.”( See vs. See, supra, 64 Cal.2d at p. 784.) The court of appeal stated “[w]e understand the Supreme Court’s opinion to mean that if separate property is commingled with community property in a bank account, then the owner of the separate property has the burden of keeping records establishing community funds were exhausted when the purchase was made.” (Marriage of McLain, supra, 7 Cal.App.5th at p.273.) Therefore, the court of appeal held that “tracing requires documentary proof because our Supreme Court has held records must be kept, and the point of keeping records is to offer them in court as evidence. (Id. at p.274.) The only record husband submitted in this case was a handwritten note regarding his alleged separate property contributions to the Big Bear residence. Even though wife stipulated to the admission of this note into evidence, and even testified that “some money from the sale of Husband’s San Dimas house was used to pay for the construction of the Big Bear house,” this was not enough to satisfy the tracing requirement. (Ibid.) This part of the trial court’s opinion, too, was affirmed.

What we learn from this case is that the supported spouse has a right to retire at 65 and any party claiming a separate property interest in an asset acquired during the marriage better have documentary records.